Putting solar power on rooftops is pretty labor-intensive. You need people to design and manufacture the panels. Then people to market the panels to homes and businesses. Then people to come and install them.That's a lot of jobs. Even though solar power provides just a tiny fraction of electricity in the United States — about 0.4 percent — the solar industry now employs roughly 174,000 people, according to a survey from the non-profit Solar Foundation. And the industry is expected to add another 36,000 jobs in 2015, as rooftop installations keep rising at a rapid clip.

To put this in perspective, 174,000 is roughly comparable to the number of workers employed by the US coal industry, if you add up all the workers in coal mining (about 80,000), plus coal transportation and coal power plants.** Yet coal still provides 39 percent of America's electricity — far, far more than solar does.

Now, mind you, this isn't a perfect comparison. Solar is still growing, which means there's a lot of installation work, whereas no one's building new coal plants in the US anymore. (Quite the contrary, many older coal plants have been closing in recent years, thanks to stricter air-pollution rules and cheap natural gas.) Still, it's interesting to look at the two industries side-by-side.

Are all these solar jobs a good thing?

There are a few different ways to look at the boom in solar jobs.From an employment perspective, it's great. The US has been reeling from a brutal recession, and any source of new jobs is welcome. In 2014, solar companies added positions 20 times faster than the rest of the economy. And these are relatively decent-paying jobs, with average wages around $20 to $24 per hour. About 55 percent were installation jobs, 19 percent were manufacturing, and 12 percent sales. 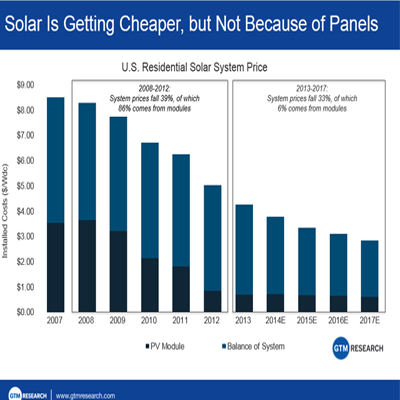 A more pessimistic way to look at these numbers, however, is to point out that solar power looks like a relatively inefficient way of creating energy. As one 2012 University of Tennessee study found, it takes far more manpower to generate one megawatt-hour of electricity from solar than it does from any other energy source.

And that's not a good thing. If the world wants to avoid drastic global warming, we'll need to replace dirtier sources of energy, like coal, with cleaner sources — solar, wind, nuclear, say — and fast. And the higher cost of solar is a real impediment to doing so.

The more encouraging news is that, in some ways, this is already starting to happen. Analysts expect residential solar systems to keep getting cheaper through 2017, thanks to reductions in "balance of systems" costs — things like installation, financing, engineering, and so on.

One example: As the solar market expands, word of mouth will spread, and it will become easier to find new customers without the need to hire as many people in sales. Solar power, in essence, is contagious. And that makes the industry more productive:


There's another angle here: Solar is far more expensive than coal if you only look at the direct costs of producing electricity. But there are indirect social costs, too. Coal plants produce lots of pollution — soot, mercury, coal ash — that foul the air and water and make people sick. These costs don't show up on electricity bills. Instead, they're dumped on the broader public, in the former of shorter lives or higher hospital bills. Coal plants are also a major source of carbon-dioxide emissions, causing damage through global warming.

If power plants had to internalize all these social costs, then sources like wind, solar, or even nuclear power would be far more competitive — as this 2012 paper by economists Michael Greenstone and Adam Looney explained. (One way to do that might be through a carbon tax on fossil fuels.)

In other words: It would be a major boon for clean energy if solar power keeps getting cheaper and less labor-intensive over time. But getting fossil-fuel users to pay for all the external costs they impose would also make a huge difference.